First re-issue for over 20 years of The Milkshakes debut album, originally released on LP on Milkshake Records in 1981 (MILK-0) and in 1995 on LP/CD on  Hangman’s Daughter (SCRAG 4) 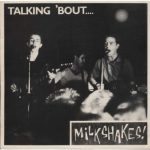