A brand new single from the Lurkers (this is Pete, Nigel & Esso, not the Arturo Bassick one), a 2 track limited 7″ on clear and black vinyl.

We asked Pete Stride about the new tracks –

‘Electrical Guitar’ started out as being slightly tongue in cheek, but I came to realise that it can also be seen as a direct statement of belief in the essence of rock ‘n’ roll – 4 beats to a bar, electrical guitar, sometimes that’s all you need!

‘That Was Julia’ is a rather more dark proposition, a tale of thwarted love and obsession, given a bit of a sapphic twist due to Danie’s vocal.” 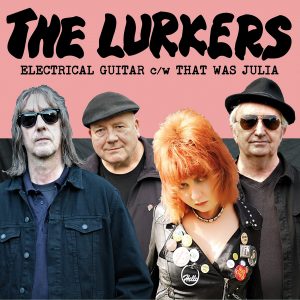