How did Billy come to be?

Holed away in the distant inter tidal marshland of mid-Seventies Kent, breaking rocks in the hot sun as a teenage dockland stonemason, undiagnosed dyslexia and general insubordination denying him the educational path he might have taken, Childish took the punk gospel Malcolm McLaren and the Sex Pistols preached in 1976 as revealed scriptural truth.

Forty-two years later Childish is the last man standing, the most enduring, uncorrupted and prolific of the class of ‘77.

And some heroic fool has now tried to sum him up in a mere forty-eight songs, from the thousand or so he has recorded.

This compilation provides tiny tasters of each of Childish’s phases, and some snippets of short-lived side-projects too.

Administered correctly, it will make an addict of you. You have been warned.

Here’s a field guide to the many faces of Billy Childish. by Stewart Lee 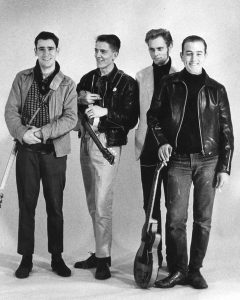 rom 1977 to 1980 The Pop Rivets played contemporary sounding primitive punk, Childish alongside Bruce Brand on guitar, and then on drums, who was to stay at his side until the end of the century; from 1980 to 1984 The Milkshakes mined the sound of exactly Hamburg 1961. The later, stomping garage anthem ‘I’m Out Of Control’ (included here), could have been written by the Sonics, The Wailers or the The Kinks and their British beat buddies, just as the first solar flares of psychedelia started to singe their fringes; from 1985 to 1989.

Thee Mighty Caesars evidenced an even simpler, earlier, and much messier take on the garage sound than The Milkshakes, with Childish starting to find a way of incorporating the sort of stanzas, which while reflective of the raw confessionals of his writing, still swung like song lyrics should. Whilst still sonically rooted somewhere around the mid-sixties, Thee Headcoats’ twelve year reign, from 1989 to 2000, seemed to allow a playful Childish freedom to indulge a variety of whims. While previous projects had seen him channeling existing garage punk forms, Thee Headcoats used these structures to service his own distinctive vision, his musical apprenticeship now complete, Childish having learned guitar on the job. 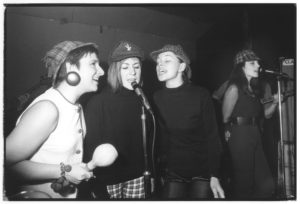 If the Bo Diddley licks of Thee Headcoats phase sounded like they emanated from the delta of the Mississippi, then the idiom and sensibility of Thee Headcoats’ songs was leaking demonstrably from the delta of the Medway. Clad in Deerstalkers in honor of the Twickenham ‘60s beat group The Downliners Sect, with whom they were to collaborate, and unduly fixated on Sherlock Holmes ephemera, Thee Headcoats found Childish finally fusing a distinctly English take on an American music, and lionised by American grunge era Sub Pop groups, luminaries for whom he represented a disappearing authenticity, occasionally sighted through the Seattle tree line, a sonic sasquatch.

Meanwhile, Childish has always had an interest in Native American culture, and to me Thee Headcoatees, the female-fronted version of Thee Headcoats that allowed Childish to foreground songs more suited to a feminine perspective, casts him as a kind of Chatham berdache. This Zuni man-woman shaman was charged with maintaining a fluid gender identity in an act of cosmic balancing, and Childish uses Thee Headcoatees as a way of 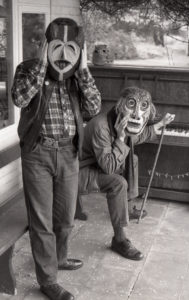 undergoing a kind of musical gender-reassignment. Subsequent distaff Childish combos, The Buffets and The Shall-I-Say-Quois maintained this idea, Headcoatee Holly Golightly would go on to record abrasive duets with childish, and a snatch of Kyra Rubella’s solo work, backed by Childish’s band, is included here too.

As he entered the new century, and nudged into his forties, Childish’s best musical work was still ahead of him, an astounding state of affairs given rock musicians’ usual descent into irrelevance and nostalgia. The Buff Medways, active from 2000 to 2005, saw Childish hook up with a new rhythm section and don cavalry twill to form a tight trio in thrall to the sound of the Soho beat scene speakeasies of late 1966
and early 1967, no earlier, and no later. The decadence of psychedelia was eschewed, but live covers of Hendrix’s ‘Fire’ and The Who’s ‘A Quick One, While He’s Away’ sat comfortably on-top of a whirlwind of windmilling drums and bass.

With wife and latter Buff Medways bassist Nurse Julie on board Childish essayed an authentic sounding Medway Delta Americana with The Chatham Singers, field recordings drawn from a parallel world where Alan Lomax and Shirley Collins traced the roots of the blues to 19th century Kent, and discovered its last living exponent breaking rocks in Chatham docks. Anticipating the anxieties of national identity that now divide England, Childish moved a decade forward from the chosen musical milieu of The Buff Medways to spend 2007 and 2008 fronting The 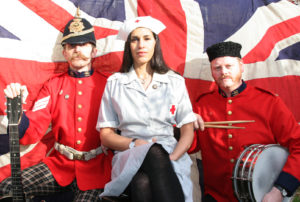 Musicians Of The British Empire. The group snagged Victorian military regalia to sneer satirical state of the nation songs, and allow Childish to recall the mood of the mid-Seventies that shaped him, over textbook 1976/77 punk riffs.

The short-lived Vermin Poets side-project morphed into The Spartan Dreggs, active from 2011 to 2014, which saw Childish switch to bass and surrender guitar and vocals to The Fire Dept’s Neil Palmer. The group’s recordings see the set texts of the poetry course at a 1950s liberal arts university, or an experimental private school, set to the sound of a trebly ‘60s folk rock band fed into the garage punk grinder, and they are a highpoint in Childish’s catalogue. 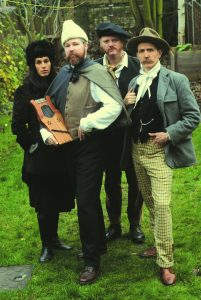 Where much of his music fills me with a virulent, if invigorating, anxiety, The Spartan Dreggs somehow touched the sublime and make me turn my face toward heaven. Childish’s current project reflects a man at peace with his past, and could almost be described as an act of time travel. CTMF, or The Chatham Forts, was the name Childish chose for his first band, back in 1976, but the proposed members never got around to rehearsing or sourcing a drum kit. In 2013

Childish and his current collaborators revived the spirit, if not the original intended line-up, of CTMF, unused lyrics he had jotted down thirty-seven years previously, many of them relating to Chatham’s local history, forming the basis of the new group’s first album. An ongoing concern, this flexible trio touch bass with all the different stylistic phases of Childish’s career, and their most recent album, Brand New Cage, features a forty year old photo of a vacantly furious young Billy, his face scarred with acne and razorblades, while inside this elder statesman of outsider art, flanked by long term drummer Wolf and his wife and co-worker Julie, stares up at the camera, now unassailable. In ‘A Song For Kylie Minogue’ Childish even appears to make peace with his own reputation, accommodating, rather than resenting, the praise and adulation of the art and music superstars who cite him as an influence, hatchets and bitten hands well and truly buried.

Few artists of such wildly independent spirit live long enough to achieve this kind of equilibrium.