NAT JOHNSON is the former singer, songwriter and guitarist of Monkey Swallows the Universe – a Sheffield based five piece band who released two critically acclaimed albums earlier in the decade, toured the UK with Richard Hawley, the Long Blondes and Camera Obscura, were profiled in The Sun and the Guardian, played a host of festivals and performed live sessions for the likes of XFM, 6music and Radio 4‘s Loose Ends. Since the band split in 2008 Nat has embarked on what has so far proved to be a very fruitful solo career with her single for Thee Sheffield Phonographic Corporation ‘Dirty Rotten Soul’ made Single of the Week by Steve Lamacq on 6 Music. Now with her debut album all recorded Nat has assembled a new backing band The Figureheads (featuring MSTU co-founder Kevin Gori, Chris Loftus of Fury of the Headteachers and Neil Piper of Champion Kickboxer) for a series of gigs throughout the Summer and Autumn – all leading up to the release of debut album ‘Roman Radio’ on the 19th of October preceded by the double ‘A’ side single 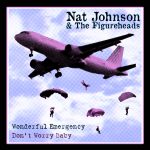 NAT JOHNSON AND THE FIGUREHEADS