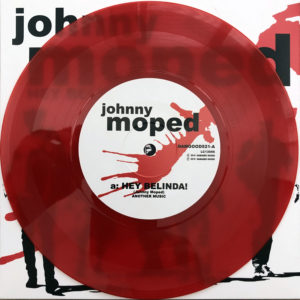 To coincide (almost) with their appearance at Rebellion Festival in Blackpool (doing electric and acoustic sets!), and their live-to-air session on Marc Riley’s 6Music show we’re releasing fan’s favourite ‘Hey Belinda!’ as a single.

‘Hey Belinda!’ is taken from the band’s current album ‘Lurrigate Your Mind’.

The B-side ‘Hiawatha’ is a brand-new reworking of a total MOPED classic, a song that originally appeared on the Search For Xerxes album, penned by Slimy Toad and original band members Fred and Dave Berk. We think you’ll love it!

On red vinyl and housed in a Reservoir Dogs spoofing sleeve. What’s not to like Tomcats!?!